Listening to the Future 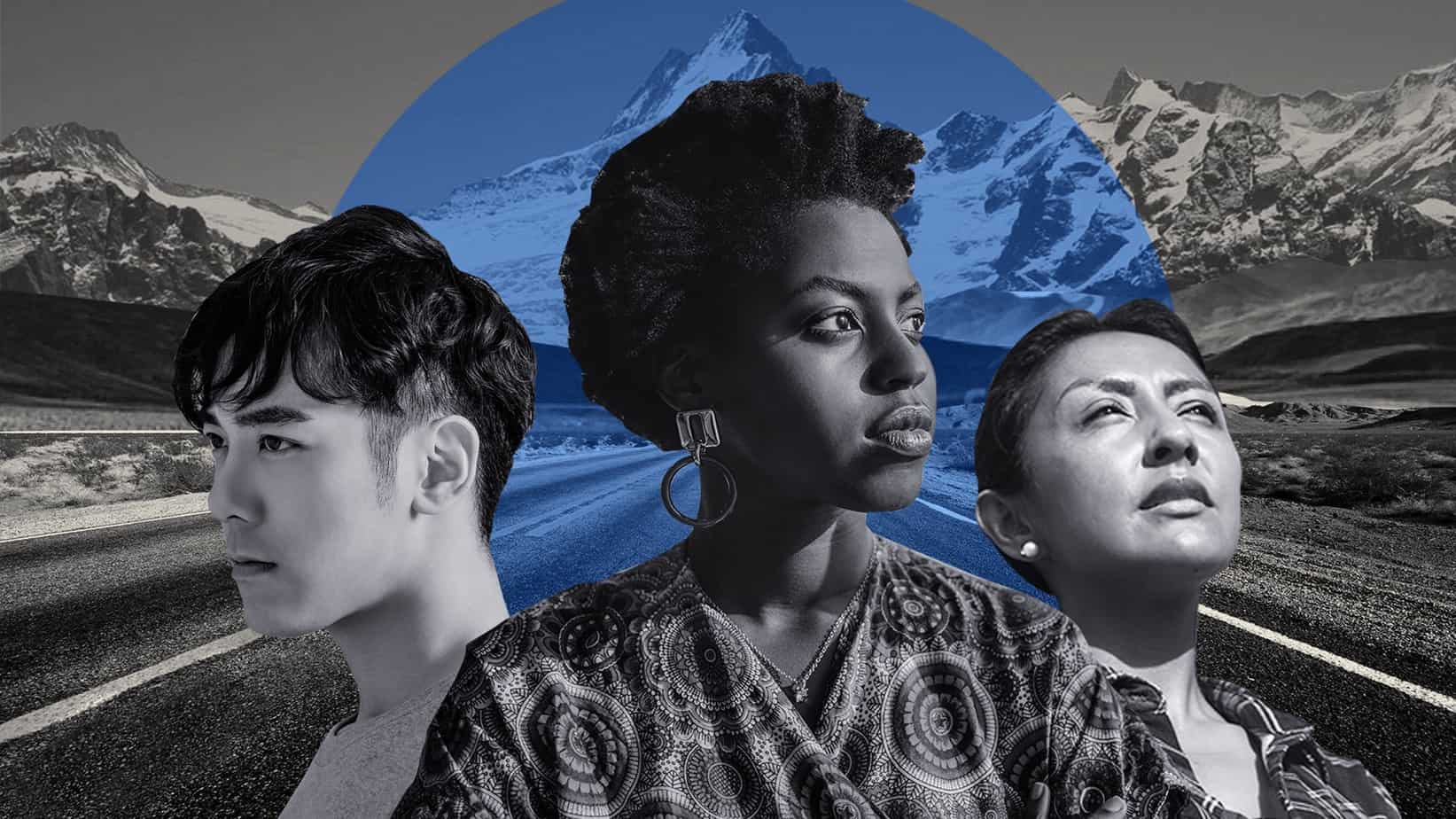 How do we build a world we’ve never seen before? We must change who drives the future.

Every day we take steps which carry our attitudes and assumptions about the future. Our steps can be fearful and cautious. They can also be bold leaps made out of clear-eyed hope and raw necessity.

In this year of concurrent crises and collapses, when many ways forward seem possible, the challenge is to critically discern between pathways which wind up leading back to a broken “normal” and pathways which lead us into a future we have never seen before — one that is more equitable, just, and beautiful.

At Omidyar Network, this kind of discernment is vital to our mission of reimagining systems that shape our daily lives: building an economy that works for all, realizing the promise of responsible technology, and fostering a more pluralistic society. We launched the Exploration & Future Sensing unit in 2019 to help achieve this mission. Building upon years of prior experimentation, the unit peers beyond what we know and see today by scanning for signals of change, investigating emerging trends, using scenarios to shake old patterns of thinking, and activating new collaborations.

Much of our exploration revolves around the question: When uncertainty abounds, how do we move beyond our own biases and blind spots to build a world we’ve never seen before?

The short answer is that we turn to community. We must center people with experience living in between worlds, or on the margins, who have honed an extraordinary capacity for imagining and building futures that are more beautiful and resilient. They’re people who have crossed cultures, borders, and identities. They have learned to live in the future and navigate its uncertain terrain often out of necessity.

When uncertainty abounds, how do we move beyond our own biases and blind spots to build a world we’ve never seen before? We turn to community. We must center people with experience living in between worlds or on the margins, who have honed an extraordinary capacity for imagining and building futures that are more beautiful and resilient.

In the process of engaging with a variety of foresight methods, creative approaches, and practitioner communities, we’re finding a growing group of partners and collaborators who embody a new wave of future thinking for social change. Their talent for exploring alternative futures comes from asking not just what the future could hold but also who thrives in it and how we will take action to get there together. Instead of simply extrapolating from existing systems, these alternative futurists are rooted in transformative visions of equity, access, belonging, and justice.

It’s never been more critical to support and partner with people who are thinking more courageously and hopefully about the future. Here are four such efforts Omidyar Network Exploration & Future Sensing is honored to support.

This podcast is a window to a more equitable future where guaranteed income, reparations, and open borders, are real possibilities.

Angela Glover Blackwell doesn’t call herself a futurist. She doesn’t issue forecasts about what 2030 and 2050 will hold. Instead, she has a remarkable track record of sensing what we need today to achieve a more equitable tomorrow, and telling stories that invite more people into that new world of possibility. After founding and leading PolicyLink for the past 20 years, Angela launched the Radical Imagination podcast. Now entering its third season, Angela features bold innovators who remind us that change is already happening. Past episodes include conversations with Chief August Creppel on climate migration; Mélisande Short-Colomb and Ana Lucia Araujo on reparations; Walidah Imarisha on storytelling and organizing; and Tiq Milan on gender.

The podcast has grown as a beacon this year. “We all need the hope that comes from two things,” Angela says in one episode. “First, envisioning our way out of this pandemic; and second, seeing ourselves emerge with the collective resolve and communal spirit to create a better society than the one we had when COVID-19 hit. A society that rejects fear, divisiveness, and the perverse idea that greed will save us. A society in which we all stand together and take care of one another. This isn’t daydreaming, it’s radical imagination.”

“We all need the hope that comes from two things. First, envisioning our way out of this pandemic; and second, seeing ourselves emerge with the collective resolve and communal spirit to create a better society than the one we had when COVID-19 hit. A society that rejects fear, divisiveness, and the perverse idea that greed will save us. A society in which we all stand together and take care of one another. This isn’t daydreaming, it’s radical imagination.” — Angela Glover Blackwell

This network of younger future-alert activists aims to influence how foresight is done…and by whom.

Foresight, the practice of investigating the future, has traditionally been dominated by a relatively small group of practitioners in Western countries with long careers in foresight methodologies. The School of International Futures, founded by Cat Tully, is addressing this imbalance with the Next Generation Foresight Practitioners (NGFP) Program, which believes that foresight empowers all changemakers to build a better future. The program supports emerging voices across underrepresented geographies with a fellowship award; connects them to a network of future-alert activists spanning 68 countries; and amplifies their influence by partnering with critical decision-making institutions.

For example, NGFP worked on a project this year helping the World Health Organization’s Western Pacific Regional Office to identify younger people’s visions and priorities for the future beyond COVID-19. As Pupul Bisht, NGFP’s Creative Lead and Network Weaver (winner of an inaugural award in 2018), explains, “We believe that when it comes to thinking about post-pandemic futures, supporting bottom-up agenda setting is critical.”

This cross-disciplinary community is remixing the art and science of collaboration to build tomorrow’s systems.

What would a water cooler for a different kind of future thinking look like? That’s one of the questions that spurred Sharon Chang to create Guild of Future Architects, led by Executive Director Kamal Sinclair. Unlike how future thinking is tethered to commercial or geopolitical objectives, Guild of Future Architects seeks to “make the world more beautiful for more people” and intentionally nurtures collaborations across a diverse array of disciplines to get there. Founding members include artists, technologists, writers, as well as practitioners in health, economics, and urban planning.

At a recent event, teams engaged virtual audiences around Shared Futures projects incubated by the Guild, including Embodied Intelligence, a framework to help people reclaim physical agency in the age of technology and surveillance; Abundant Health, a model of health care that empowers communities to restore wellness; and The Gift, a multimedia experience bridging astrophysics and social transformation. All prototypes pointed to a future that doesn’t see today’s limitations.

This design studio believes minority communities must have power to shape emerging AI and algorithmic systems before harm is done.

Who gets to shape the future? London-based for-profit design studio COMUZI believes in a more democratic vision where minority voices have the power to influence emerging algorithmic systems rather than being erased by them. Leveraging backgrounds at the nexus of technology, design, and social justice, COMUZI’s project “Beyond Tools of Resistance” will engage community members to prototype tools for holding governments and corporations accountable as AI innovations rapidly reshape how economic safety nets, health services, and transportation systems work.

That people should have influence over these systems should not be a radical idea, but when it comes to historically marginalized communities having that power, this thinking is often far outside of the proverbial box. “The process of petitioning and pressuring government officials for change can be very fragmented. It usually takes a moment to infringe the rights of minority voices and many months or years to seek justice,“ COMUZI’s Akil Benjamin notes. “With AI this problem increases tenfold, but imagine if communities had modern tools to accelerate or even get ahead of this process. That’s what we’re aiming to create.”