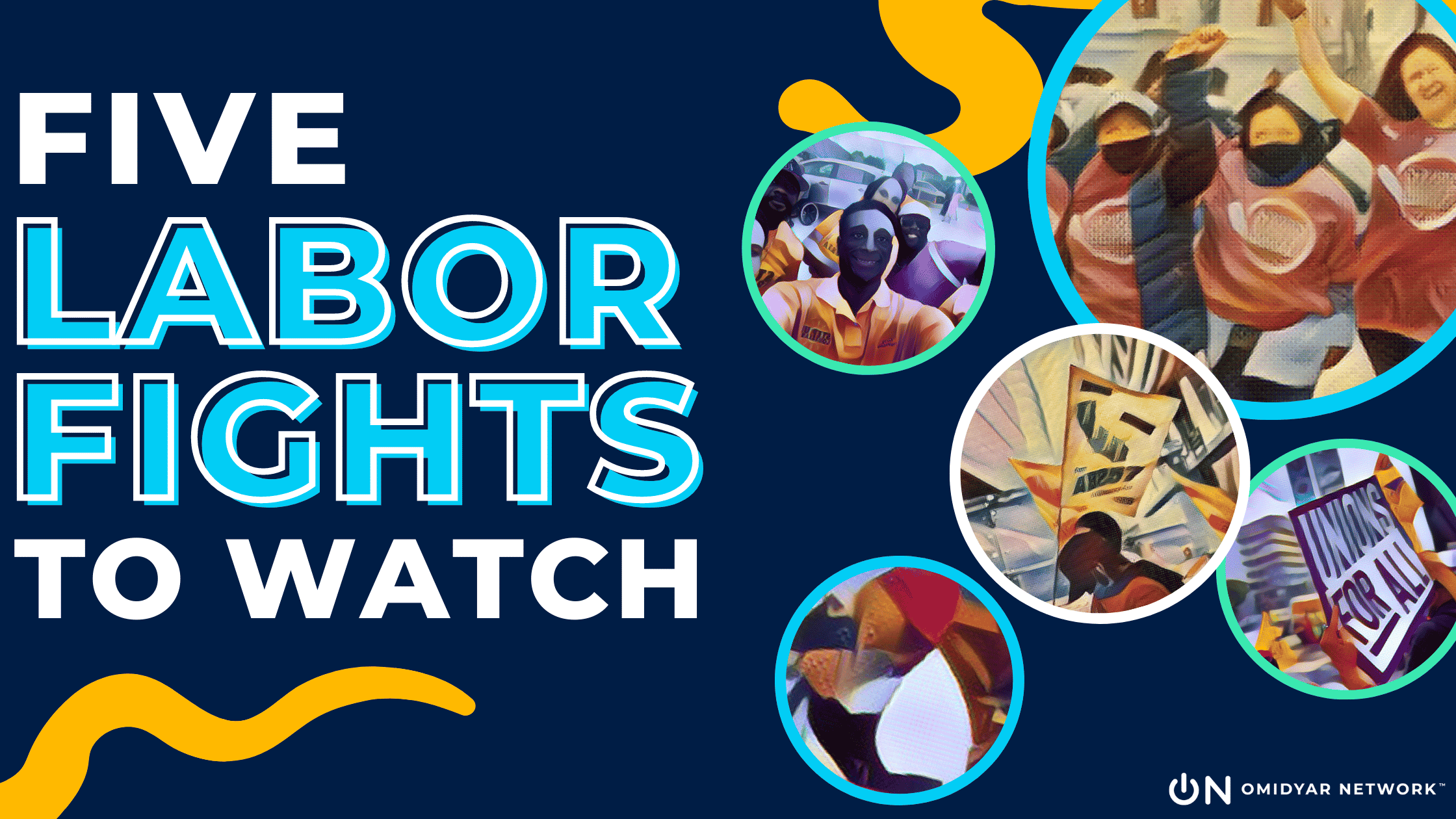 At Omidyar Network, we know that a more inclusive economy is only possible when working people have greater power and voice. With Labor Day in sight, now is the perfect time to celebrate the collective wins of the labor movement from the past, and recommit to supporting those who are organizing in the present to expand the power of working people in the future. That’s why today we are launching Five Labor Fights to Watch, the first in a regular series of posts amplifying fights for worker power from every corner of the country.
From a Starbucks team unionizing in Biddeford, Maine, to walkouts and demands for better working conditions at the Amazon air freight fulfillment center in San Bernardino, California — we’re excited to see a resurgence in labor organizing happening across the nation. Here are September’s Five Labor Fights to Watch:

In California, the State Senate just passed the FAST Recovery Act (AB 257), which would establish the nation’s first statewide sectoral standard setting council for workers in California’s fast food industry, finally giving them “a long overdue seat at the table.” Under AB 257, the Fast Food Council would have the ability to raise the industry-wide minimum wage to up to $22/hr. Similar to the state minimum wage, the industry minimum wage would adjust annually based on the Consumer Price Index. The power to raise wages year after year offers much-needed relief for frontline cooks and cashiers who are more than twice as likely to live in poverty compared to other workers in the state. A recent SEIU survey found that 85% of California’s fast-food workers reported being victim of at least one type of wage theft — which could be underpaid overtime, not being paid for full hours worked, and more. These workers are nearly 80 percent people of color, more than 60 percent are Latino and two-thirds are women, making this a race and gender equity issue that the California statehouse and Governor Newsom can solve.
As Vox describes, “While California already has some of the most robust labor laws on the books, advocates say those rules are often flouted in part because franchisees have little legal authority to make changes to their businesses aside from cutting corners on worker pay.”
Katrina vanden Heuvel at the Washington Post articulates what’s at stake: “For more than two years, our government has praised working-class Americans as “essential workers” yet treated them as anything but. Across the country, these workers are demanding rights and protections they should have been granted on the day they were hired. California lawmakers have a responsibility: pass the FAST Recovery Act and show the nation what it means to show up for the working class.”

Across the country in New York, the New York Healthy Nail Salons Coalition is taking a similar approach, working to pass legislation creating a council that would establish and enforce workplace and pay standards. In 2019, organizers won a huge battle by securing a $15 minimum wage and eliminating the tipped minimum wage. But now, workers report cuts to tips, commissions, and hours.
Workers are organizing in an industry that has long been notorious for 10–12 hour days, poor working conditions, exposure to infectious disease transmission and unsafe chemicals, and unpaid work. State Senator Jessica Ramos, co-author of the legislation, said, “Creating an industry-wide body that brings workers, salon owners and the state together to bargain and establish a uniform set of expectations and standards is how we ensure that every worker has recourse and authority to fight back against their exploitation. Any policies that are made for workers need to be developed with workers at the table.”
With a workforce made up almost entirely of immigrant women of color, improving conditions for nail salon workers is a needed step toward racial and gender justice. With national media exposing the poor working conditions in the industry, it’s time for policymakers to stand up for these workers.

3. Deploying New Tactics to Engage Workers in Louisiana and Across the South

In the South, Dollar Store employees in Louisiana are combining innovative digital tactics with grassroots organizing to shine light on the low pay and bad working conditions, including rodent infestations at some Dollar Stores — in a region that is often known for being hostile toward worker organizing. As New Orleans Public Radio reports:

Unions require winning elections and negotiations, which can drag on for years. The word can also be a non-starter when recruiting support, especially in places like the South — a region that’s historically skeptical of unions.
Labor experts say this approach is actually healthy for the labor movement — better to have different groups with separate tactics pushing for workers’ rights than relying just on collective bargaining.

Dollar Store workers have been raising their voices about work conditions, even going viral on TikTok.The activists with Step Up Louisiana are demonstrating how creative digital tactics paired with direct action and shop floor organizing have the potential to reach millions of workers beyond individual worksites and engage a new generation of young organizers. They’re showing how campaigns advocating for worker power always need to center the stories of workers who have experienced injustice firsthand and are actively fighting for solutions.

4. Raising the Standards at Nursing Homes in LA County

In Los Angeles County, The Los Angeles Alliance for a New Economy (LAANE) and SEIU launched the Quality Care Campaign, aimed at tackling the common problems of nursing homes being understaffed, under-resourced, and their workers being underpaid. By organizing for better working conditions, the coalition believes that patient care will improve as well: when workers don’t need to worry about their own well-being and how they’re going to put food on the table, they can better focus on the care they provide when on the clock.
Public opinion is on their side — Data For Progress found that a majority of voters in LA County rate the quality of care and working conditions in nursing homes as “fair” or “poor”. However, those same voters overwhelmingly think that with better resources and working conditions, nursing homes can be a reliable option for the elderly — and do not view nursing homes as a fundamentally flawed business model.
Across party lines, Data For Progress found that voters supported five key initiatives: creation of a skilled nursing facility quality standards board, as well as a local licensing system for the skilled nursing industry, raising the minimum wage for all workers in skilled nursing facilities to $25 an hour, creating a public facility rating system for nursing homes, and building public health and safety councils in skilled nursing facilities.
This is great news for the organizers who know that ensuring fair pay and working conditions is the only way to build a sustainable industry. Together, they’re fighting for policies that will help everyone: nurses, nursing home support employees, and most importantly, patients and their families.

5. Organizing for One Fair Wage across the country

In Michigan, Portland, Maine, and Washington, D.C., One Fair Wage campaigns are fighting to end the subminimum wage for tipped workers, which still stands at $2.13 an hour federally. By convening a broad coalition of workers, managers, activists, celebrities, and more, the campaigns are seeking to end subminimum wages in 25 states by 2026 — with new campaigns in Ohio and Arizona being launched most recently.
And as the New York Times covered, they’re making good progress:

Each of these fights is one data point in a trend that has been growing in recent years, and become even more obvious in the summer of 2022. Americans around the country are recognizing the critical role of worker power — a new Gallup poll showed that 71% of Americans approve of labor unions, the highest support Gallup has tracked since 1965.
Omidyar Network recently commissioned polling with Data For Progress, which showed that voters strongly support labor unions and organizing over corporations — and how pro-labor Democrats should run with that message and deliver results. Read Greg Sargent’s column in The Washington Post here.
We’ll have more fights to watch up here soon, but in the meantime, keep an eye on Hot Labor Summer, which is tracking new labor fights (and will continue to do so, despite the changing seasons). And while many of us take time this weekend to celebrate the many victories of the labor movement, we hope you’ll keep in mind these words from Amazon Labor Union leader Chris Smalls:

“The people are the ones that make these corporations go…it’s not the other way around.”